24 words that saved my life

Do you talk fast when you’re stressed?

For example, what if a 10-mil. dollar deal depended on how fast you spit-out just 24-words?

Here’s how it happened to me. 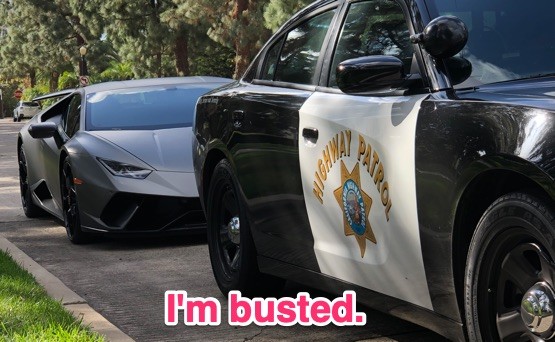 So now there's no possible way I'm going to make my meeting. This is going to cost me a huge deal.

We've all been here: the officer is going to check my license … give me a long lecture … and drag this out for an hour.

Meanwhile, I'm going to be a no-show for a critical meeting.

No meeting … no pitch.

Bye-bye ten million. My client guys flew in for the meeting, and if I don't show, it's a dead-deal.

The Highway Patrol Officer walks up to my window.

He leans down and says “Sir, any idea how fast you were going?”

“Hey Carl! You scared the shit out of me!” I said.

He started laughing, and told me how I was driving like an old lady and that I need some driving lessons.

So we take a few pictures with my car… and he says, “You can take off if you need to.” 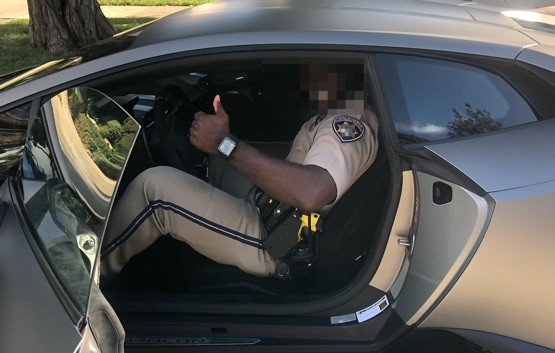 With this massive relief of tension, I decided to wait a few minutes before getting back on the road …

And this is when everything started going to straight to hell:

I ‘one-two-three' punched Carl lightly in the shoulder …

… the way friends do, as if to say, “Thanks for nothing buddy..”

Next, we were laughing at the situation and for no-reason we started doing a little air-punching and ‘shadow boxing.'

As you'll see in a moment, this is the exact point where my luck turned very, very bad …

Carl and I were still “air” boxing, and we started making some lite-contact.

But look at the size of that dude … his “messing around” might put me in the hospital.

NEXT CAME MY DUMBEST MOVE EVER:

I slip my shoulder under his guard, get behind him …

And somehow I put a decent arm-lock on Carl The Highway Patrol Officer.

We’re both breathing heavy now, as my arm-lock turned into awkward bear-hug and he's beating the back of my head with some painful dead-blows.

But now a third voice, out of nowhere, interrupts the pattern of our breathing:

“GET DOWN ON THE GROUND ASSHOLE”

I let go of Carl in an instant,

My head snapped towards the sound of the commanding voice. 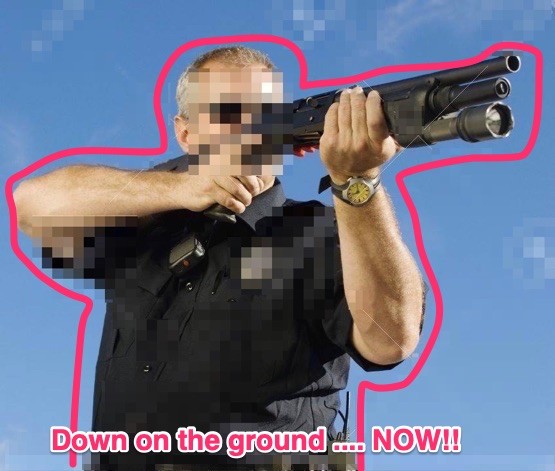 *** this is a obviously a mocked-up photo to give you an idea of what I was looking at, because you can imagine i did not have my phone out at that moment. The other photo above really is Carl sitting in my car.**

While Carl and I were messing around, here comes an active duty Sheriff’s car around the corner, randomly taking a short-cut down this side-road… and he sees us …

Better yet, It looked like the CHP was dramatically trying to “defend himself.”

So the Sheriff quietly rolled to stop, jumped out of the car …

AND HERE WE GO!

And THIS had just turned angry and confrontational.

…. because this is way too complicated a situation to “explain.”

Instead Carl just stepped to the side, towards his car.

HE KNEW HE WOULD BE FINE.

I’m the one that could get shot here.

Cops shoot people all the time for better reasons than this … do you even watch the news?

Even though I’ve never had a gun pointed at me,

Years of watching “CSI”, “Criminal Minds” and “Law & Order” burst into my brain and I knew exactly what to do:

LIE ON THE GROUND.

PUT HANDS BY SIDE

With Carl still silent, my experience told me, ‘somebody better say something'

…. so I chose these 24 words most carefully:

My Name is Oren Klaff.

This is officer Richards, my classmate and FRIEND.

….tell this officer some police stuff.

Maybe you would have said something different, I don't know.

But in the Pitch of my life, I didn’t try to “explain things.”

I didn’t make a joke, or give a bunch of confusing facts and information.

I didn’t tell someone in authority what he should think, or how to act.

Most importantly …. I didn’t “tell a big story.”

All I did was to lay out the truth in as few words as possible.

I've never been in that kind of situation before, but I know this:

In 3-seconds I had to give The Exact Truth That Explains This Very Unusual And Bad Looking Situation.

There I was, lying on the ground, face down on the pavement, scared to death.

… as I waited for the Sheriff to decide if I was telling The Truth, or not.

I have spent my whole career having to sort out Truth from Lies, with millions of dollars at stake each time, so I know what it feels like be on the other side.

And Carl finally spoke up, giving his badge number.

Carl explained what had happened. How he and I are actually friends, and how we were just messing around …

He told the Sheriff how it was just a really, really bad-case of bad-optics.

The sheriff shook his head, mumbling, “Never seen some shit like this before,” and without much else, he drove off.

Today, Carl and I are still friends, but we don't talk much about that morning because he got in a bit of trouble for it.

The one thing Carl did tell me about that day was how I had done the right thing:

* spoken CLEARLY and with CONFIDENCE

The consequences of doing this right or wrong can mean millions of dollars or even a human life. Maybe YOURS.

DEALMAKERS must learn these skills: how recognize when someone is giving you the TRUTH, or a LIE or something in between. If you don't learn lie-detection for business, your dealmaking skills will be weak, and you won't achieve your financial goals.